A Harvest Moon occurs at a specific time of the year . . . 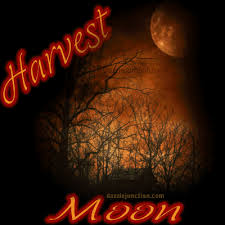 The moon officially turns full when it reaches the spot opposite to the . . . All full moons rise around the time of sunset. However, although in general the moon rises about 50 minutes later each day, as it moves in orbit around Earth, the Harvest Moon and Hunter's Moon are special, because around the time of these full moons, the time difference between moonrise on successive evenings is shorter than usual which means that the moon rises approximately 30 minutes later, from one night to the next, as seen from about 40 degrees N. or S. latitude, for several evenings around the full Hunter's or Harvest Moons. Thus there is no long period of darkness between sunset and moonrise around the time following these full moons. In times past this feature of these autumn moons was said to help farmers working to bring in their crops (or, in the case of the Hunter's Moon, hunters tracking their prey). They could continue being productive by moonlight even after the sun had set. Hence the name Harvest Moon. The reason for the shorter-than-usual rising time between successive moonrises around the time of the Harvest and Hunter's Moon is that the ecliptic—the plane of Earth's orbit around the sun—makes a narrow angle with respect to the horizon in the evening in autumn.

The Harvest Moon comes soon before or soon after the autumnal equinox. It is simply the full moon closest to that equinox. About once every four years it occurs in October (in the northern hemisphere), depending on the cycles of the moon. Currently, the latest the Harvest Moon can occur is on October 7. Often, the Harvest Moon seems to be bigger or brighter or more colorful than other full moons. These effects are related to the seasonal tilt of the earth. The warm color of the moon shortly after it rises is caused by light from the moon passing through a greater amount of atmospheric particles than when the moon is overhead. The atmosphere scatters the bluish component of moonlight (which is really reflected white light from the sun), but allows the reddish component of the light to travel a straighter path to one's eyes. Hence all celestial bodies look reddish when they are low in the sky. . . .

The Harvest Moon is also known as the Wine Moon, the Singing Moon and the Elk Call Moon. . . . In American myth and folklore the full moon of each month is given a name.

There are many variations, but the following list gives the most widely known names in the modern US:

The third full moon in a season with four full moons is called a blue moon, as described in the Maine Farmers' Almanac. Until recently it was commonly misunderstood that the second full moon in a month was the blue moon. However, it was recently discovered by Sky & Telescope magazine and reported on NPR that the interpretation of a blue moon as the second full moon of the month was erroneously reported in an issue of Sky & Telescope dating back to 1946 and then perpetuated by other media.. . .

In modern usage, when a second full moon occurs during any calendar month, it is called a Blue Moon  . . .

In some cultures, individuals whose birthdays fall on or near a harvest moon must provide a feast for the rest of the community. 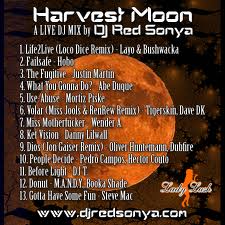