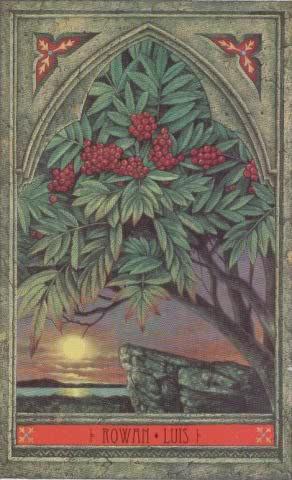 Irish Druids held Rowan trees sacred like Oaks and sometimes called it the 'Tree of Life'.  Rowan wood is one of the nine traditional firewood's to be added to the Belfire that is burned at Beltane.

Ritual Purposes:  The month of Rowan is a good time to do initiations, especially during Imbolc. The Rowan has applications in magick done for divination, astral work, strength, protection, initiation, healing, psychic energies, working with spirits of the dead, psychic powers, personal power, and success. Uses of Rowan in protective magick include carrying Rowan twigs on sea voyages to protect the ship from storms. A Rowan can be planted near a new house to protect it from lightning and evil influences.

Uses:  As attractive as Rowan is to the Fey, Rowan wood is often used in butter churns so that the butter would not be overlooked by evil Faeries. In Scotland, fires made from rowan wood were used to protect the cattle against those same type of evil fairy spirits, and it is said that 'Bewitched' horses may be controlled by a Rowan whip. Witch-wands for divining metal are often made of Rowan wood, and Rowan branches may be used to dowse for water or can be made into wands.

O rowan fair, upon your hair how white the blossom lay!

O rowan mine, I saw you shine upon a summer's day,

Your rind so bright, your leaves so light, your voice so cool and soft:

Upon your head how golden-red the crown you bore aloft! (The Two Towers, J.R.R. Tolkien)

For thousands of years the Rowan tree has been considered magical by many different cultures. Consider an excerpt from the Kalevala, which is a compilation of Finnish folk lore:

In the yard there grows a Rowan

Thou with reverent care should'st tend it

Holy is the tree there growing

Holy likewise are it's branches

On it's boughs the leaves are holy

And it's berries yet more holy

In the United States the Rowan is extensively cultivated and is becoming naturalized. It's fruit produces Fehling's solution, which when mixed with other solutions provides for a blood sugar test.

The fresh juice or compote was used as a gargle for hoarseness, sore throat and inflamed tonsils,. It was also used in scurvy, against constipation, to alleviate menstrual pain, as a tonic in rheumatic conditions and as an aid in kidney disorders.

A strong infusion of the berries was used for hemorrhoids and also in painful urination. The jam (cook fruit with half as much sugar as berries) was used 1 teaspoon every two hours for mild diarrhea.

The dried flowers were used as a tonic herbal tea.